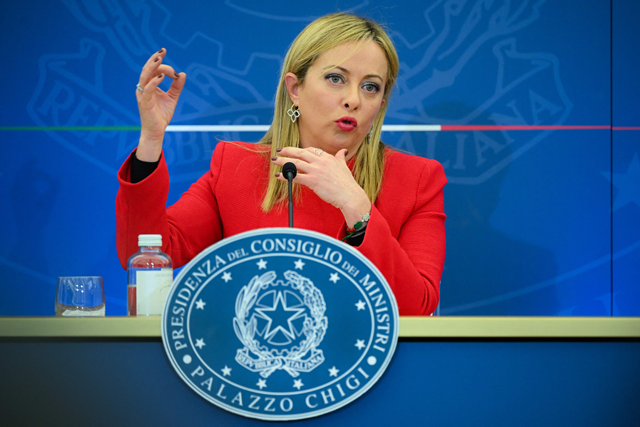 ROME — Italy's new far-right government unveiled its first budget on Tuesday, with most of the nearly 35 billion euros in spending for 2023 going on the energy crisis rather than flashy electoral promises.

More than 21 billion euros ($21.5 billion) will go towards supporting households and businesses with sky-high gas and electricity bills, a major cause of the soaring inflation which risks tipping the eurozone's third largest economy into recession next year.

"There are two big priorities, growth... and social justice, meaning a particular focus on families, those on the lowest incomes and the most fragile groups," Prime Minister Giorgia Meloni told a press conference after her Cabinet approved the budget in the early hours.

They had promised sweeping tax cuts and more funds for pensioners and for families, sparking concerns about the impact on Italy's already colossal debt.

But Meloni, whose party once called for Italy to abandon the euro single currency, has sought to present herself as a responsible leader at a time of global economic uncertainty.

Notably, the coalition's flagship measure — extending a 15 per cent flat tax for the self-employed — did not go as far as initially expected.

"It's a prudent and responsible budget, in continuity" with the previous government under Mario Draghi, said Giuliano Noci, professor at Milan's Politecnico school of management.

League leader Matteo Salvini told a joint press conference it was a budget that was "not miraculous but that brings more money to millions of Italian homes".

The plan now heads to parliament, where it can be amended. It must then be adopted by both chambers by December 31.

Italy's last populist government, led by the Five Star Movement and the League in 2018-19, clashed with the European Union over its failure to keep spending under control.

Italy raised its 2023 public deficit forecast earlier this month to 4.5 per cent of gross domestic product, above the 3.4 per cent forecast in September by Draghi's government.

Employees will benefit from tax reductions of 2 per cent for incomes up to 35,000 euros per year, as under Draghi, and 3 per cent for those on salaries below 20,000 euros.

Companies hiring women and young people will benefit from tax exemptions, while tax amnesties, an election promise, will be offered to people owing less than 1,000 euros incurred before 2015.

On cash payments in shops and businesses, the government raised the ceiling from 2,000 euros to 5,000 euros — despite warnings from opposition parties that the move would favour corruption.

It also adjusted pension rules so people who have worked for 41 years can retire at 62 years old, a move affecting an estimated 48,000 people.

The retirement age in Italy, known for its ageing population, had been set to rise from 64 to 67 in 2023.

"With the global economy slowing down and interest rates rising, it is forced to remain cautious" and carry out what electoral promises it can, a bit at a time, noted Lorenzo Codogno a former chief economist at the Treasury.

The new measures will be financed in part by reforming the so-called citizens' income, a poverty relief scheme introduced by the Five Star Movement.

The reform shortens the time those deemed fit to work can claim the benefit and the entire system will be overhauled by 2024.

The government is also set to raise new revenues from a windfall tax on energy companies.

The budget also includes the resurrection of a long-shelved plan to construct a bridge linking Sicily to mainland Italy.

Salvini said he would seek EU funds for the controversial plan for the Strait of Messina, either in launching a new tender or reopening the project ultimately shuttered in 2011.

That year, the European Commission said the project — revived and cancelled by various previous governments — was not strategic for the development of transport in the EU.
AFP