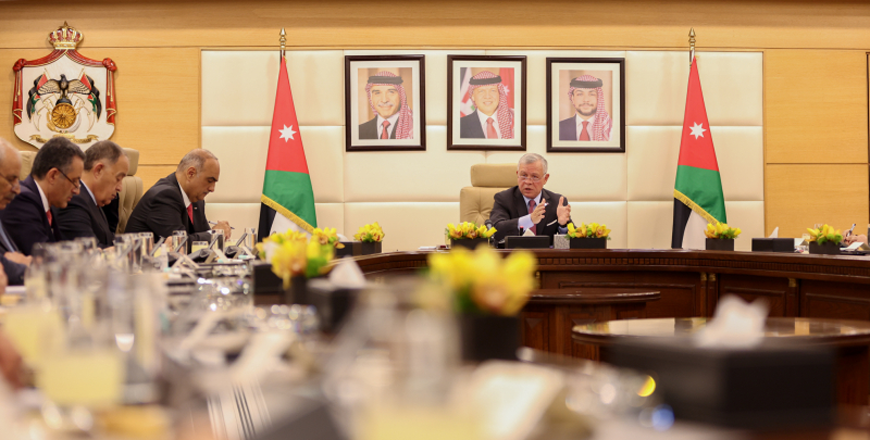 His Majesty King Abdullah, chairing part of a Cabinet meeting at the Prime Ministry on Wednesday, reaffirmed that modernisation, across its political, economic, and administrative tracks, is a state project.

According to a Royal Hashemite Court (RHC) statement, King Abdullah warned that any slowdown or decline in the implementation of modernisation is unacceptable, directing the government to finalise the executive programme of the Economic Modernisation Vision as soon as possible, while tying it to the needed funds and outlining clear and measurable performance indicators.

Noting the importance of Jordan’s steadfast stability for investment, His Majesty said there are investment success stories in the country and those who bet against Jordan’s stability have lost their investments abroad.

The King said attracting investment is not built solely on favourable relations, stressing that investors also look for a good return on their investments and Jordanian institutions must recognise this.

His Majesty directed Prime Minister Bisher Khasawneh to submit a progress report on the Economic Modernisation Vision every three months, saying the relevant ministries’ performance will be assessed based on progress in implementing the vision.

The King stressed that each minister is responsible for building the capacities of his or her ministry to achieve its objectives and implement the economic and administrative modernisation tracks, so that their performance can be assessed on that basis.

Any official who is not up to the task should step down in order to not delay the team, His Majesty said.

The King urged communicating with the public to engage them as partners and them that the government serves them, stressing the need for citizens to see tangible achievements on the ground.

His Majesty called for focusing on the media and the public’s right to access information and maintaining communication with professional media outlets, warning that misinformation and rumours would dominate otherwise.

The King said he will be following up on the government’s performance for any shortcomings or progress.

For his part, Prime Minister Khasawneh stressed that there would be no room for hesitation in implementing programmes that serve the public and moving forward with modernisation within a clear timeframe, reaffirming the government’s commitment to submitting periodic progress reports.

The ministers spoke about the implementation of economic and administrative modernisation and gave an on the progress of preparing for the national water carrier project and reducing water loss, as well as efforts to reform and develop the energy sector.petra