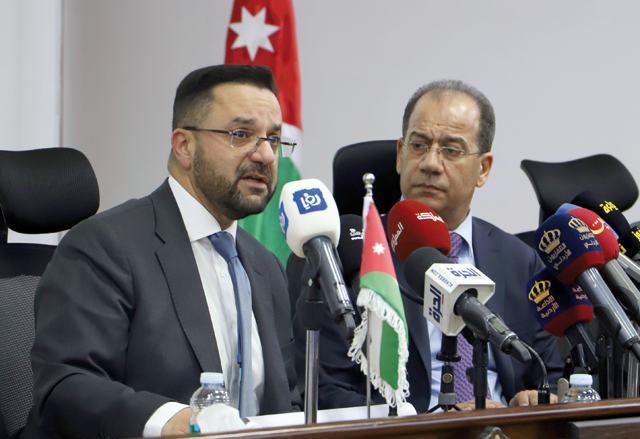 AMMAN — The draft general budget for 2023 stands at JD11.432 billion, increasing by 8.3 per cent from 2022, Finance Minister Mohamad Al-Ississ announced on Wednesday.

His remarks were made during a press conference on Wednesday, announcing the details of the draft general budget and governmental unit budget bills for the fiscal year 2023, following their approval by the Cabinet.

The 2023 budget “shows that Jordan is on the right path towards a recovery from the repercussions of the COVID-19 pandemic which affected the whole world over the past three years”, the minister said.

Also speaking at the press conference, Minister of Government Communications Faisal Shboul said that the general budget for 2023 reflects the government’s commitment to the three modernisation paths: Political, economic, and administrative.

It also demonstrates the recovery from the repercussions of the COVID pandemic, he added.

The minister also pointed out that the global price hike of fuel derivatives last year, and the government’s endurance of JD500 million, as well as the increase in food prices, have all been factors that constituted a burden on the general budget.

Shboul added that “there have been some factors affecting our economy, most notably the decline in foreign assistance during the past few years, in addition to the lack of financing allocated for the Jordan Response Plan for the Syria Crisis which currently stands at 22-23 per cent”.

The finance minister noted that the primary budget deficit will also decrease from 3.4 per cent to 2.9 per cent in 2023.

This is the third general budget for the government without any increases on taxes and fees or the imposition of new ones, according to Al-Ississ.

He added that external grants are expected to reach JD808 million in 2023, increasing by 0.8 per cent from the previous year.

Moreover, the projected “real growth” rate for the year 2023 will stand at 2.7 per cent, he said.

The inflation rate is also expected to remain 3.8 per cent during the year 2023, he added, noting that this is very good compared to inflation rates in other countries around the world, which have skyrocketed.

The deficit in the balance-of-payments current account as a percentage of the gross domestic product (GDP) will from 7.9 per cent to 6.1 per cent during the year 2023, according to Al-Ississ.

He also pointed out that the budget allocations for the Economic Modernisation Vision, which aims to “one million jobs over the next 10 years”, amount to roughly JD355 million.

The allocations for the administrative reform plan, which aims to “enhance governmental services and accelerate their automation process”, is around JD40 million, Al-Ississ added.