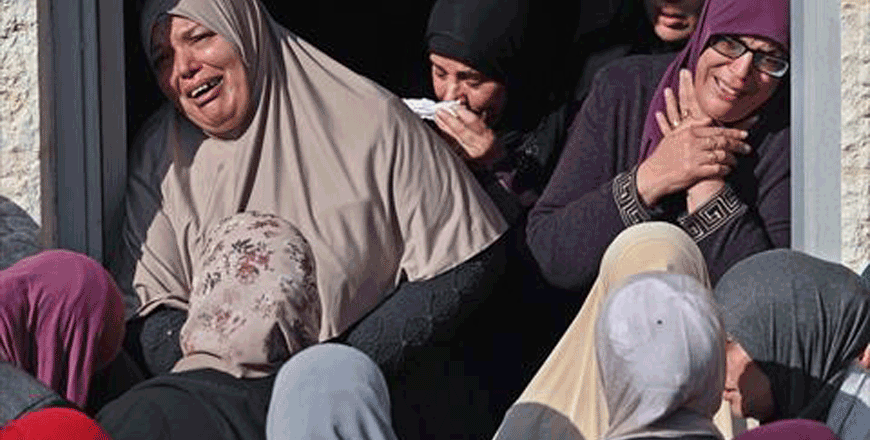 The Palestinian health ministry said three people were killed "by bullets from the Israeli occupation during its aggression in Jenin at dawn today".

Mahmoud Al Saadi, head of the Palestinian Red Crescent in Jenin, told AFP an ambulance crew came under fire "from a building where Israeli snipers were present" while it was evacuating a wounded person.

The Islamic Jihad group said its fighters engaged in "fierce clashes" with Israeli forces in Jenin.

Mourners gathered as Palestinians carried the body of one of those killed through the streets for his funeral procession.

A surge in bloodshed this year has seen at least 150 Palestinians killed in the occupied West Bank.

The toll includes more than 40 Palestinians killed during Israeli operations in the Jenin area, among them children as young as 12 and veteran Palestinian-American journalist Shireen Abu Akleh as well as fighters.

In the West Bank town of Silwad, Palestinians gathered for the funeral of Mujahid Mahmoud Hamed, 32, killed by Israeli forces on Wednesday.

He was killed following what the army said was a drive-by shooting at a military post.

The European Union said Saturday it was “greatly concerned about the increasing level of violence”.

A US State Department spokesman called Friday “for all parties to do everything in their power to de-escalate the situation”.

Hamas, the Palestinian militant group which rules Gaza, described the latest killings in the West Bank as “cowardly assassinations” by Israeli forces.

“We call on the masses of our people in the West Bank and the revolutionary youth to escalate the resistance” against the Israeli occupation, it said.
AFP