The Jordanian Mansaf .. a world heritage with inclusive social and cultural implications 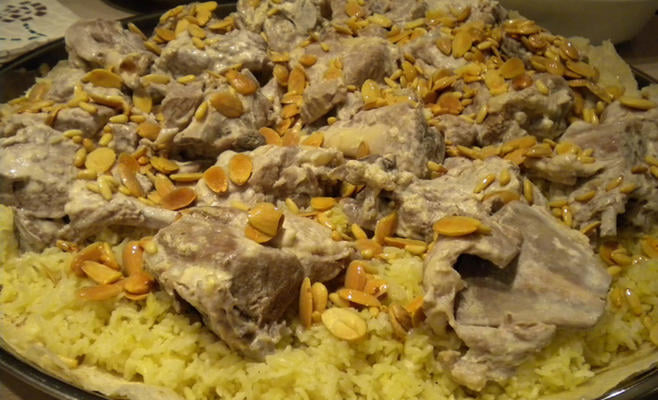 Mansaf, which is linked to the national cultural identity and the traditions of Jordanian folk life, predominates in the dictionary of popular dishes in the Kingdom, and other food styles that have spread on a large scale have not been able to affect it. ».

The Jordanian Permanent Mission to UNESCO had submitted a file to include the "Jordanian Mansaf as a festive feast with its social and cultural connotations" on the Representative List of the Intangible Cultural Heritage of Humanity in the year 2021, with the Kingdom's participation in the seventeenth session of the Intergovernmental Committee for the Safeguarding of the Intangible Cultural Heritage, where Jordan succeeded. In November 2022, “Al-Mansaf” was officially included in the list, after intense work in which a team of researchers and a number of ministries and governmental and private agencies concerned in this regard participated, in coordination with the Jordanian mission.

The researcher and writer Nayef Al-Nawaiseh, who worked with a team of researchers in cooperation with the Ministry of Culture to push for UNESCO’s agreement to include Mansaf on the list of human heritage, said that Mansaf’s victory on the world food list carries unique cultural and social connotations that made it one of the most important heritage elements in Jordan that deserve to be registered in this list. The menu as a social food to honor and appreciate and to the values of sophistication and generosity, all of which indicate the status of the clan or the person in it.

He pointed out that Mansaf represents a state of civilized agreement among those who eat it, so that it appears that it is not food for satiety, but rather a bearer of oral cultural values and a gathering for people around the table of a cultural dialogue that ends with reading poetry and dragging it on the lordship and telling many anecdotes and stories related to the clan and society. Upgrading and testing the levels of understanding and awareness as if it is a school for education and behavior modification.

Al-Nawaisa indicated that the mansaf also carries a lot of social connotations, as it represents the pinnacle of food etiquette in our society (etiquette) in terms of sitting around the mansaf, the way of eating, and respect for young and old.

Mansaf is the only dish that is served on occasions of weddings and sorrows in all governorates of the Kingdom. It is also a symbol of generosity and generosity. To eat the Mansaf meal, there are strict etiquette that should be taken into account when eating, such as using the hand to eat, and eating from the side closest to the eaters, who are reprimanded for extending their hand to any other side of the Mansaf, where other eaters stand. It is also stipulated, as an old habit, not to extend the hand to the head of the carcass, which is placed erect in the middle of the Sidr Mansaf to eat any part of it.

For the manufacture of jameed milk, there are stages narrated by Umm Muhammad by saying that jameed is done manually in homes from sheep’s milk, which is churned after frothing by adding curd to it inside a tool called the “sour”, which has been replaced at the present time by an electric stirrer until the fat is deposited, forming the “baladi butter”, which is subsequently used in Manufacture of baladi ghee after adding some herbs and flavorings to it. As for the remaining liquid, which is called “buttermilk”, it is placed in cloth sheets after heating it slightly and left to be the “jabbing” material from which jameed is made in the form of medium-sized balls after salt is added to it to help in its cohesion and preservation. from spoilage when stored. The opinion